Written by Neditor. Posted in News 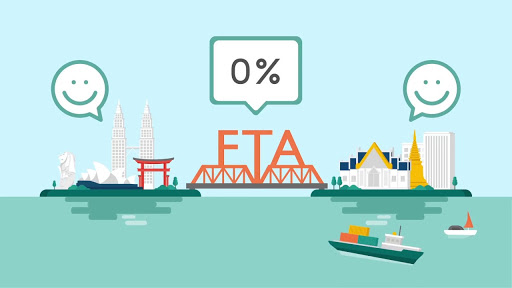 Globalization and trade liberalization are not only the most important incentive to drive the economy in the XXI century but also an inevitable tendency for the progress of production specialization and the distribution of the labour force. The incentive trade links via the bilateral and multilateral Free Trade Agreements (FTAs) are powerful motivation, attracting the attention and participation of many countries and Vietnam is no exception. Since the first FTA was signed, the number of FTAs is quickly increasing. This triggers the smooth flow of goods to move across boundaries and spaces between different countries.

The level of integration is expressed from bilateral and multilateral cooperation to global cooperation. As of 2020, there are 185 bilateral agreements and 77 multilateral agreements in the world. According to statistics of Asia Regional Integration Center, in the period 1960 to 2016, world trade increased by about 3.5% per year and the proportion of the world’s gross domestic product (GDP) rose from 24% to 56%. 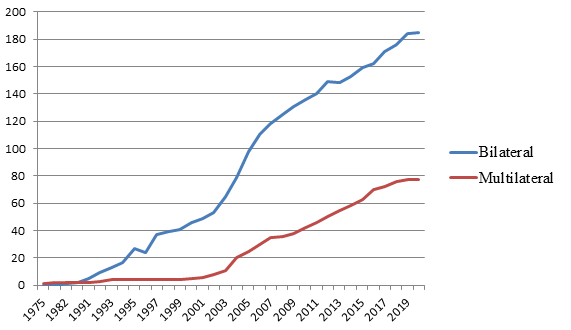 Vietnam is a country with a high level of international economic integration. This is a result of the active participation and negotiation of Free Trade Agreements (FTAs) with other countries in the world, especially new-generation FTAs which are negotiated and signed in recent times, containing large scope and high level of liberalization.

As of June 2020, Vietnam officially joined 13 FTAs (including 7 FTAs signed as a member of ASEAN and 6 FTAs signed as an independent party), in addition, Vietnam is negotiating 3 FTAs. The total number of Vietnam’s trading partners in FTAs is 56 economies, including 55 countries and 1 territory. Vietnam’s signing of bilateral and multilateral FTAs has enabled Vietnamese enterprises to expand their markets, gaining access to regional and global markets.

(Including FTA negotiations, participation within ASEAN, and other cooperation)

FTA approved and will come into effect on August 1st, 2020

Besides, FTAs have positive improvements in attracting foreign investment into Vietnam, especially CPTPP and EVFTA, those large markets provide a great deal of capital to the country. In 2006, FDI disbursement only reached 5 billion dollars. In 2019, those break a record with 20.38 billion dollars, increasing 6.7% compared to the same period in 2018. FDI projects have contributed nearly 20% of GDP. This result is an important incentive for developing the country. In addition, FTAs play an important role in promoting growth, economic transition, improving spiritual and material life for Vietnamese society. Along with that, per capita income has improved considerably compared to what it was. GDP increases from 730 dollars in 2006 to 2.786 dollars in 2019, rising about 3.6 times. The poverty rate plummeted from over 70% to 6%. Although Vietnam has harnessed integration opportunities to expand the export scale, accessing international markets, however, the ratio of export to GDP indicates that Vietnam’s economy depends on the world market. This imposes risks on market stability when the world must face the economic crisis.

Moreover, FTAs help to enhance the business environment and institution, hence, Vietnam has opportunities to restructure toward the import-export system more balanced. Thanks to FTA, Vietnam has motivations to improve the investment environment, carrying on business toward transparency, safety for investors of all economic sectors.

Vietnam’s import and export turnover, Balance of Trade in the period of 2012 to 2019 As a result of reducing tax through FTAs, Vietnam's export has gained many achievements in recent years. Due to the effectiveness of several new-generation FTAs, Vietnam's export goods have better edge competitive since tariff barriers are gradually removed. In 2019, Vietnam's export turnover increased 8% compared with one in 2018. The EU is a potential market and Vietnam's major trading partners. When EVFTA is officially effective on August 1st, 2020, the exported proportion of Vietnam to the European market will sharply rise. Up to 70% of Vietnam's goods will be decreased and the EU will commit reduction for import tax of 99.7% of tariff lines which is equivalent to 99.7% of Vietnam's exports to the EU. Trade transactions increased rapidly from 2000 to 2018, in which goods export increased rapidly (about 10 times), from 2.3 billion dollars to 13.89 billion dollars.

Among FTA that Vietnam has joined, AFTA, CPTPP and EVFTA are considered the most important agreements due to its influence on Vietnam’s economy and business environment. ASEAN was attracting a large investment capital when Vietnam joined in the AFTA, therefore, it has created many possible opportunities to industrialize and modernize the country. Meanwhile, CPTPP is considered a high-quality FTA, with the deepest level of commitment ever. CPTPP member countries constitute a huge market containing 500 million people, holding approximately 15% of GDP, accounting for about 15% of total global trade. It also pushes Vietnam’s export goods to big countries on 3 continents: Asia, America and Oceania. Regarding EVFTA, the commitments of tax and investments in this agreement help Vietnam to renovate the economic structure, improving the local business environment. All of these FTAs provide favorable conditions for the growing economy in Vietnam.

ASEAN Free Trade Area (AFTA) is a multilateral free trade area among countries in the ASEAN area. Purpose of AFTA is to enhance ASEAN's comparative capability, contemporaneously encourage the attractiveness of the foreign direct investment. The road map is to gradually reduce tariffs to 0-5%, eliminating tariffs barriers of some commodity groups and remove non-tariff barriers, harmonizing procedures of member counties in AFTA. The key mechanism for carrying out AFTA is Common Effective Preferential Tariff (CEPT).

The initiative to form AFTA was rooted in Thailand. Subsequently, this agreement was signed in 1992. Initially, there are only six countries which are Brunei, Indonesia, Malaysia, Philippines, Singapore and Thailand (the general name is ASEAN-6). Cambodia, Laos, Myanmar and Vietnam (the general name is CLMV) were required participating in this group.

CEPT sketched out a detailed mechanism intending to reduce tariffs. The first stage was started on 1st January 1993, all Member States complied with the reduction from existing tariff rates to 20%. This stage would be done within a time frame of 5 years to 8 years, which depended on the intention of each Member State. Countries were encouraged to adopt an annual rate reduction. In the second stage, tariff rates would be reduced from 20% or below within a time frame of 7 years. The rate of reduction shall be at a minimum of 5% quantum per reduction.

With the achievements of reduction tariffs because of the implementation of AFTA and CEPT, ASEAN Trade in Goods Agreement (ATIGA) signed in February 2009 and has effectiveness on May 17th, 2010. According to ATIGA, ASEAN countries would completely eliminate tariff barriers basing on the road map for ASEAN-6 countries, 99.2% of tariff lines have been removed, whereas 90.0% of tariff lines of acceding countries including Cambodia, Laos, Myanmar and Vietnam were eliminated since 2017. In 2018, the tariff elimination rate in the whole ASEAN area reached more 98.6%. For Vietnam, since January 1st, 2018, an addition (7%) tariff lines were reduced to 0%. This leads to an increase in the sum of tariff lines from ASEAN to Vietnam (97%).

Comprehensive and Progressive Agreement for Trans-Pacific Partnership (CPTTP) is a new-generation free trade agreement, containing 11 countries: Australia, Brunei, Canada, Chile, Japan, Malaysia, Mexico, New Zealand, Peru, Singapore and Vietnam. The agreement was signed on March 8th, 2018. For Vietnam, it has been effective since January 14th, 2019. This agreement adjusts many fields, from traditional commerce to some little traditional issues as government procurement, e-commerce, or expanding some non-traditional issues as labor, environment, anti-corruption in trade and investment. The CPTTP is considered a high quality and comprehensive FTA with the deepest commitment level from the past up to now.

After 1 year since the CPTPP agreement has been effective, in 2019, trade exchange turnover between Vietnam and Member State in CPTPP reached 77.4 billion-dollar, increasing 3.9% compared with those in 2018. Export from Vietnam to member countries in CPTPP reached 39.5 billion dollars, rising 7.2% compared with those in 2018. Remarkably, some markets as Canada and Mexico which Vietnam did not set up trade relations in the time before noted a sharp increase when CPTPP took effect. Therefore, in 2020, Vietnam had export surplus products to CPTPP member countries about 1.6 billion dollars. Earlier, in 2018, Vietnam had import surplus from those about 0.9 billion dollars.

The commitment of import tax of CPTPP countries to Vietnam

CPTPP paves the way for economic growth. Base on the favorable result which CPTPP brought Vietnam during 1 year Vietnam has been a membership of CPTPP, CPTPP will help Vietnam’s GDP increase 4.7% in 2035 compared with those in 2017. Vietnam’s export turnover will have an average increase of 4.32% per year and the export market will be diversities. The total export turnover will reach 311.1 billion dollars in 2030, compared to 179.5 billion dollars in 2017. Moreover, CPTPP is expected to breed 20000 to 26000 works per year. 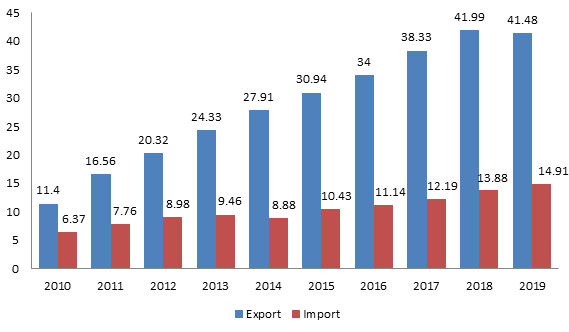 With EVFTA, Vietnam will deepen its relationship with the global economy, Vietnamese goods and services to the global value chains, pushing economic growth.

In conclusion, Free Trade Agreements are the key for Vietnam to connect the global trade network. Since Vietnam access the global trade system, with FTAs, the Vietnamese economy has acquired outstanding achievements. It has enhanced the country’s position in global value chains through new business and investment opportunities, facilitating stable and sustainable development. New-generation FTAs breed a lot of benefits to member States, attracting investment capital, improving administrative institutions and business environment. Nevertheless, it is a challenge to successfully implement the FTAs, as well as deploy the commitments that Vietnam has made. It’s safe to say that it requires comprehensive changes from public and private entities in order to ensure commitments that help the nation’s development.

Please contact us for any further concerns related to the topic of this article.

Asia Business Consulting is a boutique consulting firm specializing in corporate establishment, legal and business advisory, tax and payroll compliance, HR administration, market research to multinationals investing in Vietnam. For further information or to contact the firm, please email This email address is being protected from spambots. You need JavaScript enabled to view it. or download the company brochure. You can stay up to date with the latest business and investment news in Vietnam by subscribing to our newsletters.